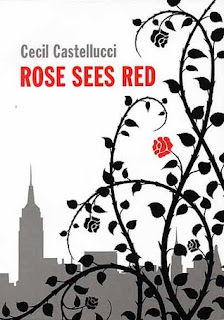 When I saw the cover of this novel by YA author/diva Cecil Castellucci, I thought it was a contemporary fairy-tale retelling, a la Beastly.  Instead, it's a novel set in the early 1980's about the last years of the Cold War,  dance, friendship, and freedom.  The main characters are two teenage girls:  Rose, a talented dancer who attends the New York High School for the Performing Arts, and her neighbor Yrena, a 16-year old ballet dancer who lives right next door in a Soviet compound.

Rose has given up on friendship after being dumped by her so-called best friend Daisy when Rose keeps taking ballet even though Daisy decides "ballet is stupid."  The other kids from school are not her friends either; she closes herself off to the different "galaxies of friends" that orbit around her, since she is so afraid of being hurt again.

But things begin to change for Rose when her Russian neighbor, Yrena, unexpectedly climbs through her window one night.  What starts out as a simple trip in the neighborhood to get an ice cream cone while evading the KGB agents that follow Yrena everywhere turns out to be an all-night adventure that neither girl planned but neither one will ever forget--an innocent adventure that becomes "an unspecified international incident."

When I first picked up this book, I asked myself if a book set in the 1980's can be classified as historical fiction.  But then I realized that for today's teens, the Soviet Union, the arms race, and the anti-nuclear rallies of the early '80's are a whole generation ago--times they never experienced.  A world without texting, I-pods, the Internet, and even DVD's--practically as foreign as the Middle Ages or ancient Rome.  Told in the first person by Rose, Rose Sees Red manages to keep a delicate balance of being entertaining while still putting forward a message about the universality of friendship, even in the face of nations' hating each other.  It's a slim book (197 pages) that should appeal to many teens--no need to have a particular interest in U.S. Soviet relations to appreciate this book.

Some other blog reviews (not a comprehensive list) can be found at Librarian by Day, Reading Nook, Youth Services Corner, Pure Imagination, Emily's Reading Room, and Teenreads.

Disclosure:  Review copy provided by publisher.
Posted by Fourth Musketeer at 10:39 AM

Thanks for reminding me that I want this one!

And it is rather, um, poignant? depressing? amusing? to realize that one's high school years are now historical fiction...If you're a building, it takes fifty years before you are historic enough to be eligible for listing on the National Register. That seems a tad more reasonable...although it's not all that many years before I reach that milestone too!