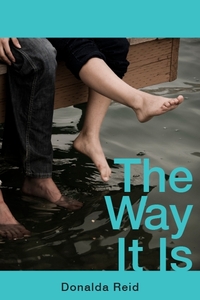 Recommended for ages 12 and up.
Ellen Manery is a brilliant, science nerd who's most comfortable with her books and in the lab, not socializing with other kids her age.  "Socially isolated," her teachers call her on her permanent school records.  It's 1967, and when her parents decide to give up the rat race and move from Vancouver to Salmon Arm, where they have bought a resort on a lake in the middle of nowhere, she's convinced they've ruined her life.  Sure enough, when she starts her senior  year at the local high school, nothing about her fits in, from her height (she towers over everyone) to her dowdy clothes (the other girls are dressed in colorful mini-skirts) to her haircut and lack of make-up.  And especially her academic interests--the counselor tries to dissuade her from taking advanced science and math courses, saying that they are too hard for girls and she should enroll in home economics and art instead.
The only person at school who seems willing to talk to her is a dark haired young man, Tony, who like Ellen, is an outsider--he's the only Indian student in an all-white school.  Slowly and carefully, Tony and Ellen develop a friendship, even though Ellen finds herself putting her foot into her mouth from time to time because of her ignorance of Indian culture.  She helps Tony with his math, and he in turn teaches her to dance.  They share their dreams--Ellen wants to be a medical doctor, and Tony wants to go to college and pursue a technical degree.  Ellen soon realizes that she's attracted to Tony as more than a friend, and dreams of what his kisses would be like.  But they are from different worlds--can they really be more than friends?


I found this book by debut Canadian novelist Donalda Reid highly engrossing--in fact I read the entire book in one evening.  The main characters of Ellen and Tony were well-drawn and convincing, and I was drawn into their story.  In the U.S. we don't read or learn enough about our neighbors to the north, and I was happy to learn about the differences and parallels between how native populations were treated in Canada vs. the U.S.  Ellen realizes that the Indians in Canada are not the teepee-living stereotypes portrayed in her history textbooks, and Tony realizes that not all white people believe all Indians are drunkards and lazy bums.  The author also uses events happening in the civil rights movement in the U.S. at the time to highlight the similar injustices faced by the Canadian Indians.  Sexism and the Vietnam War also play roles in the narrative.


I also enjoyed how Reid uses Frances Hodgson Burnett's Secret Garden as a kind of framework for the novel.  As the year passes, Ellen grows to love the beauty of Salmon Arm:

"This place is my Secret Garden, she thought.  When I came here, I was as bitter and reclusive as Mary Lennox.  I found my Dickon in Tony and I've changed."

I thoroughly enjoyed this novel, with the exception of the very graphic scene in which Ellen helps to skin a moose calf (OK, I'm a squeamish urban girl!)  The character of Ellen grows and changes during the course of the book, but in a believable way, and as the reader we can appreciate how she comes out of her shell, much like Mary Lennox.


Check out other blog reviews at Simply Stacie , CM Magazine, Things She Read, The Allure of Books.

I am so adding this to my Amazon cart! It sounds great.