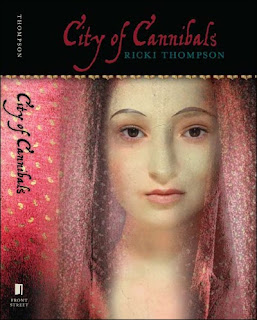 This novel, by debut novelist Ricki Thompson, had been sitting on my nightstand for some time, patiently waiting its turn to be read, until one day when I was perusing the Cybils nominations and noticed that this novel had been nominated by none other than Karen Cushman, one of my favorite writers of historical fiction for young people.  That was enough of a recommendation to move City of Cannibals to the top of my pile.

I have to admit I was not particularly drawn to this book by the cover, and based on the blurb on the back and the title, I thought it was a fantasy story--which it is definitely not. So what is this book about?

It's the engrossing story of a teenage girl, Dell, who lives with her drunk, abusive, and cruel father, her brother and auntie in Tudor England.  Her mother, a lady-in-waiting to Queen Catherine, wife of Henry VIII, is dead and buried on the hill near the cave where they live.  Finally Dell has had enough of the abuse and escapes with her only friend, Bartholomew, a puppet imbued by Dell with a lively and witty personality, to the city far below them.  Dell, and the reader, know the city as the City of Cannibals.  Her father has warned her ever since she can remember that people there eat each other's flesh, and drink human blood. We soon realize that the city is none other than London, a frightening place where Dell knows no one.  When she first enters the city gates, she decides her father was right..."this city was Hell, and now she was a part of it."  She knows only that she must seek out The Brown Boy, a mysterious young man clothed in brown garments who leaves packages for them in the hills every week.  In the city, she can invent a new identity for herself, as a puppet master, although she has only the one puppet to her name.

It's a time of turmoil in London; King Henry VIII has taken Anne Boleyn to be his wife, traitors who question the king are executed  in the public square, and the king's soldiers are plundering the churches.  But somehow in the London crowds, Dell spots the Brown Boy, who we learn is a novice monk named Ronaldo. When Dell falls ill in the city, she is taken in by the kindly John the Joiner, who through an unlikely coincidence turns out to know young Ronaldo as well.  They are involved in a dangerous game against the king, refusing to sign the Oath of Allegiance to him.  Dell becomes involved in their clandestine activities as well, delivering secret letters to monasteries. Thomas Cromwell, too, appears in the novel, with his book in which he writes the names of all those suspected of treason toward the king.

And Dell, for whom John the Joiner builds a puppet theatre, begins to perform at the London fairs, but her heart belongs to Ronaldo.  Can she save Ronaldo--and herself from Cromwell's powerful grip?

This is a rich and complex story that fans of books about Tudor England will really enjoy.  The book is set in 1536, a pivotal point in Henry's reign as he attempts to consolidate the power of the church in his own person.  An author's note provides some brief historical context, but some of the story might be confusing if the reader did not have a basic idea of the history at the time. Considering I recently read the massive adult novel Wolf Hall by Hilary Mantel (or more accurately, listened to the audiobook), the period was very fresh in my mind.  Teens will also enjoy the element of the forbidden romance between Dell and Ronaldo.  While some readers may be surprised at the sexuality between the characters, in fact priests breaking their chastity vows was a common enough ocurrance at the time, with plenty of priests and even popes having children of their own.  I particularly admired how the author does an outstanding job creating a sense of place in this novel; there is an earthy quality about the writing, with vivid descriptions of chamber pots, the river's fishiness, the clatter of the city.  Moreover, Dell was a character that the reader grows to care about, and I really loved her relationship with her sarcastic and witty puppet, Bartholomew (I have a feeling that Bartholomew was very unhappy not to be on the cover of this book, by the way!)

Check out the author's interview with Cynthia Leitich Smith on Cynsations, and other blog reviews in Bookish Blather, Whispers of Dawn, Parents Choice Awards,  and The 3 R's.

The author's website includes a discussion guide perfect for teen book groups or classroom use.

This looks really good! I love reading about that time period.

This sounds really great. I have to admit, the cover doesn't draw me in, but your review certainly does!

I am not typically drawn to this time period but I was attracted to this cover.

And the story pulled me in immediately. It took me awhile to get my bearings. I actually thought it must be fantasy at first but I loved that it was indeed realistic fiction. A terrific read that both educated and captured me.

Yes, Bartholomew - such a great character!

And even though I don't normally go for the middle ages I also admire anything written by Katherine Sturtevant. She's phenomenal too!

This is probably my favourite time period to learn and read about! I'm really loving the premise. And I learned something new today about the priests of the time.

I read this book in my english class and it has some strange parts... The last paragraph on the first page.......