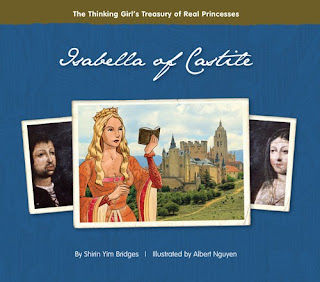 As a princess-lover myself from way back, I was excited to read about a new series of picture-book biographies aimed at readers in upper elementary school, The Thinking Girl's Treasury of Real Princesses, from Goosebottom Books.  The brain-child of author Shirin Yim Bridges, this series focuses on strong-willed, independent women who exercised power in a time when power was usually restricted to men.  All volumes in this series are illustrated by San Francisco artist Albert Nyguyen.

There are currently six separately-sold fact-filled volumes, each a fascinating picture book biography of a different real-life princess.  The volumes include a multi-cultural group of princesses who also represent different times in history:  Isabella of Castille, Hatshepsut of Egypt, Qutlugh Terkan Khatun of Persia, Artemesia of Caria, Nur Jahan of India, and Sorghaghtani of Mongolia.  They would be an excellent fit for public or school libraries and despite their 24 page format, provide detailed text that would offer plentiful material for school reports.

They are also a good fit for young people who enjoy historical fiction biographies of royalty such as Scholastic's The Royal Diaries series.

Today I will share with you highlights of two of these books.

Isabella of Castille by Shirin Yim Bridges (Goosebottom Books, 2010):   Isabella of Castille is perhaps best known to young people as the queen who sponsored Christopher Columbus' expedition to find a trading route to Asia.  Bridges points out that unlike in fairy tales, where princesses get rescued by princes and then "swept away to a 'happily ever after'" Isabella made a "happily ever after" for herself.  She had a sad childhood, living in exile with her mother after her father died and her half-brother took the throne.  But when she becomes heir to the throne of Castile, she refuses all the suitors her half-brother presents, wanting to marry Ferdinand, heir to the throne of Aragon, instead.  Bridges explains in accessible language the politics behind royal marriages, and how despite everything, Ferdinand and Isabella fell in love.  She provides details of their stormy marriage, Isabella's coronation, her leading the Castillian army into battle, her clothing, her children, and more.  The author also does not gloss over negative aspects of Isabella's legacy, including the infamous Spanish Inquisition, launched under her reign, and the high price native populations paid for the Spanish conquest of the Americas. 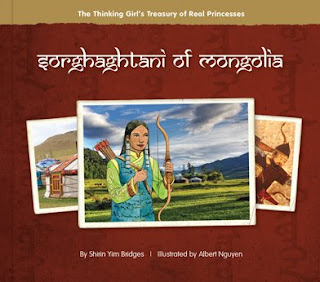 Sorghaghtani of Mongolia by Shirin Yim Bridges (Goosebottom Books, 2010)  Sorghaghtani, a princess from one of the tribes north of China, was married at a very young age to one of the sons of Genghis Khan, who at the time was the conquerer of half the world.  We learn about the Mongol court's traditional nomadic lifestyle, living in round tents, and requiring over 100 carts to move their possessions every few months to find better pasture for the animals.  Like others of her tribe, Sorghaghtani was independent and capable, and when her husband dies, she becomes the ruler over all his lands.  Her wise rule was based on cooperation, tolerance, and mutual respect, and her third son, Kublai Khan, went on to absorb her lessons as he completed the conquest of China.


Both books are amply illustrated with pen and watercolor illustrations, photos, and period paintings, include a glossary with advice on how to pronounce unusual names, as well as maps and a timeline of different princesses in the series, and a "what she wore" section.  A bibliography in each volume with suggestions for further reading and web resources would have been a useful addition.
It is often very young girls who are obsessed with princesses; see Peggy Orenstein's new book, Cinderella Ate My Daughter:  Dispatches from the Front Lines of the New Girly-Girl Culture (Harper, 2011) for more on this topic.  Nonetheless, the 9 to 13 year old crowd that these books are targeted to still has many princess worshippers, only instead of Cinderella and Sleeping Beauty they now idolize Miley Cyrus and Selena Gomez, among others.  This series provides an alternative to what author Bridges calls the "all-too-pervasive message that girls should look pretty, sit around, and wait to be rescued by a prince."  And we can all say Amen to that!
For further information on this series, see the Goosebottom website as well as a very informative article from Publisher's Weekly, "Goosebottom Books Seeks to Empower and Entertain 'Thinking Girls.'"

To enter to win one copy each of these two books for your home or school library, please leave a comment below with your e-mail address so I can contact you if you are the winner, and share with me the real-life princess (or queen) from history whom you find most fascinating (no fictional Disney princesses, please)!  The winner will be selected by random number generator on March 31, 2011.
Posted by Fourth Musketeer at 5:00 AM

I like Queen Boudica, she is not well known, but she was really ahead of her time.
twoofakind12@yahoo.com

I think this is one of the most needed kinds of books. Women have been strong throughout time and kids need a chance to read about them.

I think one of my all time favorite queen is Eleanor of Aquitaine....independent, feisty and oh so very smart. Another queen I adore is actually in the Bible...Esther. Quite the opposite from Eleanor. Quiet and yet very influential at another time where pushing your own agenda could end your life pronto!!!!

I would love to win these, thanks! for the giveaway.

I agree with you about Queen Esther. There's a beautiful picture book about her called Esther's Story by Diane Wolkstein--it may be out of print since it's a few years old.

And you can't forget the Veggie Tales video version--which is very funny although maybe not one of their best. Still who can forget Esther as a stalk of celery, or whatever she's supposed to be!

We would love to win these for our library. I'm always trying to satiate the appetites of my princess-loving readers and I'm sure these books would do the trick!

With One World Many Stories as our Summer Reading Program theme -- both these titles would be wonderful additions to our collection. This morning I was reading about strong females in various countries around the world. Great article on 'shakers' in the Newsweek (maybe last week, has Hillary R. Clinton on the cover) -- anyway very inspiring and definitely some courageous women. Match these books with some real life NGO work and nice teen program.
Thank you again for this opportunity.
Renee Christiansen, rchristiansen@lancasterlilbraries.org

Cool. I'd never heard about the Mongolian princess. I have to agree with the above posters. I like Queen Esther and Boudica. I saw this rather graphic documentary on her on PBS once. She is quite the fascinating lady.

Oooh, definitely Eleanor of Aquitaine! a brilliant and witty woman of indomitable spirit at a time when royal women were supposed to provide large dowries, produce heirs, and shut up. The best book about her IMO is the fictional biography A Proud Taste for Scarlet and Miniver by E. L. Konigsburg. The 1968 movie about her starring Katharine Hepburn is pretty amazing, too. Well, okay, it's about her husband Henry (The Lion in Winter), but I think Eleanor steals the show.

This would be a terrific addition to my classroom library and/or for my daughters to read. I find Queen Esther to be very fascinating and inspiring. Thank you for posting about this resource!

My vote is for Hatshepsut - pharaoh for over 20 years! She even got to wear the false beard!

I'm Kate Evangelista, author of Taste, and I just wanted to take this time to introduce myself. If you have the time, please stop by The Coffee Bar by using the link below:

I hope to see you there.

Growing up, I was fascinated by Lady Jane, the nine days queen. Recently, I've loved reading about Princess Kaiulani from Hawaii.

I graduated with a B.A. in Women's Studies so this is right up my alley.

I have ALWAYS been interseted in Anastacia Romanov and her sisters. I love the idea that any of them may have survived.

Boudicca! This collection would be great for my library to show young girls some examples of REAL princesses as role models!

Queen Elizabeth I is the queen I find so fascinating. She was able to avoid getting married for one thing. Pretty much unheard of back then!

Hi, Would love to win these for the Santee Library in San Diego, California. My name is Marisa Lowe, and I am a youth services librarian - working with teens and children - so this would be a great addition.
My e-mail address is: marisa.lowe@sdcounty.ca.gov