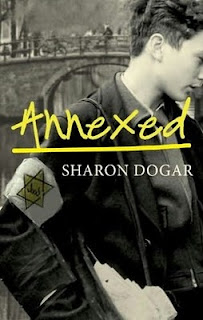 Recommended for ages 12 and up.
I give British author Sharon Dogar my 2010 Chutzpah* Award for Young Adult Literature (a new but perhaps recurring award) for having the courage to re-imagine the story of the all-too-real teenager Anne Frank, who has become one of the "icons," if I dare use a Christian term, of the Holocaust.  Indeed, Dogar has come under ample criticism for her book, even before its October 2010 U.S. publication date, from no less than Anne Frank's own cousin (see the article from the N.Y. Daily News.) Or check out this article from the website Jezebel:  The Anne Frank Sex Scene You Haven't Been Waiting For (written by a columnist who admits she hasn't read Dogar's book).

So what exactly is this book that has already proved controversial?  In Annexed, Dogar imagines the story of the years hiding in the attic from the point of view of Peter Van Pels, the teenage boy whose family shared the small space with the Franks.

The novel opens in May, 1945; Peter is close to death at Mauthausen Concentration Camp, with his memories spilling into his consciousness.  "There was a girl, wasn't there?  There was a place."  Peter's narrative then returns to July 1942, when he is forced to go into hiding; his "diary" entries alternate with comments, set off in italics, from the dying Peter as he looks back on his time in the Annex.  He hates the idea of going into hiding with the irritating Anne Frank; dreams of his girlfriend Liese, who has already been rounded up by the Nazis, torture him at night, and sometimes he wakes up with his sheets wet.  He's a flesh and blood teenage boy, who wishes he could go fight instead of hide, as his family and the Franks wait for the war to end and the British or the Americans to come liberate them.

Peter's scared they'll be caught, but also scared he'll never make love to a girl.  As Anne's body matures from a little girl to a young woman, it's not hard to imagine the two trapped young people developing feelings toward each other, feelings which are documented in Anne's actual diary.  In Annexed, they have conversations about the differences between male and female sexual parts, and Anne, despite her apparent sophistication on so many subjects, is pretty ignorant on this score.  Peter, on the other hand, practices his commercial English by imagining a business letter written at the war's end requesting a shipload of prophylactics for newly freed Jews.

The sensitive Mr. Frank realizes a problem may be developing--two teenage girls (Anne and her sister, Margot), and only one Peter.  He thinks it's best if the three young people stay "just friends,"  but in the isolation of the Annex, it's not easy.  Eventually Peter realizes that he's in love with Anne.  So what about the big sex scenes in this book?  There's some gentle kisses exchanged in Peter's tiny room in the attic, "holding each other. Talking and talking and talking."  Eventually the kisses become more passionate; "Her body is against mine...our mouths press.  And I can't stop. I don't want to stop. Until Anne pulls away."  She can't wait to get that in her diary, Peter thinks.  Later he holds her "so close I forget where she begins and I end."  Do they have intercourse in this scene?  Does it really matter?  I interpreted it as some heavy exploration, not sex, but who could blame them if they did?  I thought the scene was tastefully done by Dogar, and really left the actual extent of their activity to the reader's imagination, as it should be.

But as we know, their love, whether imagined by Dogar or real, was short-lived, since all the occupants of the Annex were arrested in August 1944.  Unlike Anne's actual diary, Dogar's book goes on to describe Peter's life after his arrest, as they are all transported to a holding camp and then put on the very last train from Holland to Auschwitz, although at the time they did not know where they were going.  Dogar reconstructs what may have happened to Peter from the testimonies of other survivors, describing the horrible journey on the cattle cars and the arrival in Auschwitz, where the women and the men were separated.  Dogar describes the brutal roll calls, the selections, the inhuman work details, how the prisoners were stripped of all their humanity.  With the end of the war in sight, Peter's father urges him to survive, whatever it costs.  But Peter, along with most of the surviving prisoners from Auschwitz, is forced on a grueling death march through Poland to Mauthausen.
In Dogar's version of events, Peter dies at the camp, and from his deathbed  Peter sees Anne in his dreams..."her eyes are wide and her hands are busy writing, writing--recording each memory.  She hears everything. Sees everything. Just as she always has."  From existing records, it is unclear if Peter died on the long march or at the camp itself, just before or after liberation.  The book provides an epilogue detailing what happened to the different occupants of the Annex, as well as a brief bibliography of relevant books, DVD's and websites. Dogar explains in her preface that "reimagining can be an important part of keeping history alive...we can't change what happened to her [Anne Frank] and her family and friends.  But we can keep on telling her story, keep on thinking about what it means to be human...and try to keep the facts of what happened during the Second World War alive for each new generation, in the hope that they remain aware of how catastrophic the consequences of hate can be." Dogar's goal is surely worthwhile, and if she inspires some teens to take a second look at the meaning of Anne Frank's life and perhaps delve further into the history of the Holocaust, I say bravo to her.  I found her book sensitively written, providing a compelling addition to the Anne Frank story that will surely engage Dogar's teen audience.  I hope this will be widely purchased for school and public libraries.
Posted by Fourth Musketeer at 5:00 AM

I'll look out for this one--thanks!

Yay for courageous, imaginative writers! I think it's hard to mess with a classic -- people have strong feelings attached to their experience with the book. Thanks so much for your review. (And Margo, your page displays really strange for me--- somewhere in the middle it becomes just a long line of single-file letters down the RH side ??) I look forward to reading!

What a novel concept! The Diary of a Young Girl is my all time favorite book. I am rereading it right now. So this feels really pertinent.

Am still processing the idea of "tampering" with this story.

But am really intrigued. I will definitely be reading! Thanks so much for the review.

This book is quite a imaginative idea. It reminds me somewhat of a book I read a few years about called The Boy Who Loved Anne Frank - written from Peter's point of view as a survivor.
I will have to look for Annexed and give it a read when it comes out.
I do agree that the author should receive your first ever Chutzpah Award, though.

What a great review...sounding quite creative and imaginary.

First let me say that I love the idea of a Chutzpah Award! Beyond that, I think you've provided a thorough and well thought out analysis and really given us a sense of the book. This is book blogging at its best. Thanks for sharing this post on the September 2010 Jewish Book Carnival! I like the theme of your blog and I hope you'll participate in future Jewish Book Carnivals as well.

I'll agree that it took guts to write something about such beloved people. But, as you already know, I didn't much enjoy it. Still, very well written review of the book!