Nonfiction Monday Book Review: Emma's Poem: The Voice of the Statue of Liberty, by Linda Glaser and Claire A. Nivola (Houghton Mifflin Harcourt, 2010) 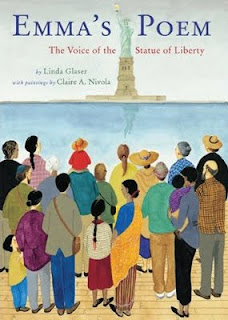 Who among us doesn't know these famous lines:
Give me your tired, your poor,
Your huddled masses yearning to breathe free...


But we are less familiar with the woman who penned those world-renowned verses, 19th century American poet Emma Lazarus.  Linda Glaser offers us a poignant view into the short life of this New York poet and philanthropist, whose words have become nearly as famous as the statue herself.    The author introduces us to Emma as a small child, growing up in a privileged environment with "plenty of everything," surrounded by other people who had "plenty of everything."  When Emma visits Ward's Island and meets very poor immigrants, Jews like herself who had made the long, hard journey to America, she wants to help them, and begins to write about the immigrants in the newspaper and in poems to raise awareness of the poverty in which they lived.

When the huge statue of Lady Liberty is under construction in France, Emma is asked, along with other noted American authors, to write something for a literary collection that would be sold to help pay for a pedestal for the great statue.  Although the statue initially had nothing to do with immigrants, Emma imagined how it would be the first thing new arrivals would see as they entered New York Harbor, and decided to write a poem from the point of view of the statue herself.  The author describes how Emma didn't live to see the statue erected, but after her death the poem was engraved on a plaque and placed inside the entrance to the pedestal of the Statue of Liberty for visitors to read.  The poem became so famous that schoolchildren learned it and it was even set to music by Irving Berlin.  But most important,
"Because of Emma's poem, the Statue of Liberty had become the mother of immigrants. And her torch was a lamp held out to welcome them."

The book includes an author's note with additional historical details on Lazarus and of course the complete text of the poem, entitled "The New Colossus."  The author also provides suggestions for further reading.

Claire Nivola's graceful folk-art style paintings are very engaging and complement the text.  The illustrations are particularly effective in contrasting the upper-class existence in Emma's house and the sad faces of the immigrants.  This book could be read aloud to children as young as kindergarten age, and I could imagine it being used very effectively in classrooms in talking about family history and immigration to the United States.

I will not be at all surprised to see this on the Association of Jewish Libraries Sidney Taylor Award list for outstanding books for children that authentically portray the Jewish experience.  However, this book has broad appeal beyond a Jewish audience, for the immigrant experience is embedded in the history of most American families.
Posted by Fourth Musketeer at 5:00 PM

Margo, I'm so happy to see that you're aware of the Sydney Taylor Book Award. Are you a member of AJL?