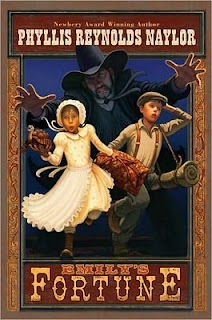 
Fans of comic Wild West adventures like Betsy Byars' Golly Sisters books should eat up this rip-roaring tale from Newbery winning author Phyllis Reynolds Naylor, who has written over 135 diverse books for young readers.  Our heroine, Emily, is a very meek eight-year old who is tragically orphaned when her mother and her very wealthy employer are killed in a carriage accident.  Her only friend is a small turtle, Rufus, who lives in a box.

With her only living relative the evil Uncle Victor, Emily is sent off to live with her aunt Hilda in the far-away West.  Barely escaping from the "Catchum Child-Catching Services:  Orphans, Strays, and Roustabouts Rounded up Quickly," Emily gets on the train where she meets Jackson, a good-for-nothing trouble-making orphan who's also headed out West.  But soon there's TROUBLE!  It turns out that Emily is an heiress--$10 million worth, and the evil Uncle Victor is hot on their trail...to get his hands on her money!  Can Jackson and Emily catch the stagecoach, survive armed robbery, evade Uncle Victor and get to Aunt Hilda in Redbud before it's too late?


The charming black and white illustrations, large type, and relatively simple vocabulary,  make this very friendly to readers who are stepping up from series like Magic Treehouse.  Each chapter ends with a cliff-hanger in giant old-West style fonts; examples include "and who in creepin' creation do you suppose was in it?" or "And what in blinkin' bloomers do you think she saw?"
Naylor demonstrates a great sense of humor and adventure in this new book, which would be a very fun read-aloud either for classroom or at home, with strong appeal to both girls and boys.  It would also be a good book to recommend both to reluctant readers, who will be encouraged to read forward by the cliff-hangers at the end of each chapters and the action-driven plot, as well as avid readers.
Posted by Fourth Musketeer at 5:00 AM

Always looking for books for my 9 year old - thanks for the review!