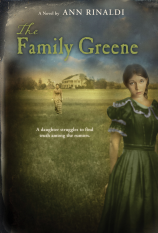 Ann Rinaldi is one of our most prolific and well-loved writers of historical fiction for young people, particularly well-known for stories set during the American Revolution and the Civil War.  That said, I was disappointed with her newest novel, published in May, which centers around several generations of women in the family of General Nathaniel Greene, second in command to George Washington during the Revolutionary War.

Even the cover is disappointing, with its sad-faced model that doesn't seem to fit at all with the themes that emerge in the story (compared to the stunning YA covers that have been coming out lately, what teenager is going to pick this one up?)  The story is told in two parts; the first part is narrated by Katy Littlefield, who is 10 years old when our story starts.  She is sent to live with her worldly Aunt Catharine, whose husband is a prominent patriot.  Her aunt is a notorious flirt and good friends (or perhaps more?) with Benjamin Franklin.  Her aunt is supposed to teach her how to be a "lady," with lessons such as this:


You should know this, Caty Littlefield...we women have the right to flirt.  If it is kept a harmless pastime.  Men expect it from us. Done properly, it gives us power, and Lord knows we have litle of that...But it must be learned to be done properly.

When Katy grows up, she marries a cousin of Uncle Greene, Nathaniel, 12 years older than she is. War breaks out soon after their marriage.  Her husband is quickly promoted to brigadier general, and she goes with him, as did Martha Washington, to live at Valley Forge, where she entertains all the gentlemen with her lively spirits, and becomes a "belle of the camp."

Rinaldi then cuts off this story and switches narrators to Caty's daughter, Cornelia, some years later on the family plantation in Georgia.  Cornelia is concerned with her mother's reputation when she witnesses her exchanging kisses with their schoolteacher, but Cornelia's problems escalate when her nasty older sister tells her that Nathaniel Greene is not really her father, but rather that her father was a lover of her mother's.  Cornelia becomes obsessed with finding out the truth about her parentage.

This would have been a more appealing novel if Rinaldi had stuck with the first part of the narrative, perhaps enlarging on the section in which the young married Greenes are at Valley Forge.  In the second half of the novel, the character of Caty suddenly changes, without explanation, to a mean-spirited flirt who can be cruel to her children and disrespectful to her husband by her actions, which to my view go beyond most people's definition of flirting.   While some of Rinaldi's fans may enjoy this book, it definitely was not one of her best.
Posted by Fourth Musketeer at 5:00 AM

Oh, too bad--that story doesn't appeal to me either. I like the cover, though--I think it's lovely, but I agree it's not one to grab a YA audience.