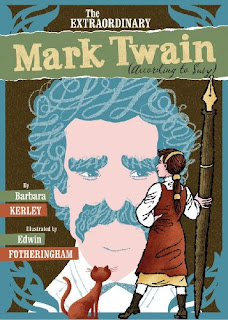 
Award-winning writer Barbara Kerley, author of the acclaimed picture books  Dinosaurs of Waterhouse Hawkins and What To Do About Alice, among others, has provided a unique perspective on Mark Twain for young readers by sharing the story of how Twain's 13 year old daughter Susy researched and wrote a biography of her famous father.

She decided to write his biography because people who thought they knew the world-famous writer were "just plain wrong about her papa."  Yes, he was a humorist, but Susy knew he was much more than that, and she "was determined to set the record straight." She observed his "fine qualities...and not so fine qualities.  Into the biography--and under the pillow--it all went."

Although Susy began her project in secret, her mother found it and shared it with her husband.  He said it was the finest compliment he had ever received.

Kerley explores how Susy included the key elements of any biography, the subject's youth, private and public life, from how he liked to relax on family vacations to a relative's nearby farm, to how he was sometimes serious and sometimes silly. Twain enjoyed Susy's 130 page biography so much that he included passages from it in his own autobiography.

Inserted in this oversized volume are mini-journals, stapled to the book spine, which include excerpts from Susy's actual text in script, misspellings and all.

In an author's note, Kerley provides additional biographical information on Mark Twain/Samuel Clemens, as well as on daughter Susy, who sadly died at the age of twenty-four.  Kerley also provides instructions on "writing an extraordinary biography," which can also be downloaded at www.barbarakerley.com/teachers.html. This book would be a terrific choice to read aloud to an elementary or even middle-school class, and then have them write a biography of someone they know or are interested in.

The stylized, cartoon-like illustrations by Edwin Fotheringham, who also collaborated with Kerley on What To Do About Alice, can almost tell the story without the text.  On the cover, we see Susy wielding an enormous pen, scribbles from which appear in all the illustrations, tying the book together with a common design theme.   One of my favorite illustrations shows the Twain household's home open like a Victorian dollhouse, and we can see Twain and his family in each room, complete with him flinging oversized shirts with enormous buttons out the windows.  On illustrator Edwin Fotheringham's website, you can see many of the two-page spreads from this stunning book.

This book is particularly timely, since 2010 is the 100th anniversary of Twain's death.  Before he died, the author stipulated that his complete autobiography was not to be released until he had been dead for a century.  In November, the University of California Berkeley, which has had the manuscript in a vault, will be releasing the first volume of what will be a trilogy of his memoirs (excerpts have been published before, but not the entire manuscript).

Young people looking to read more about Twain will surely enjoy Sid Fleischman's The Trouble Begins at 8: A Life of Mark Twain in the Wild, Wild West (Greenwillow, 2008).  For a good basic children's biography of Twain, you can also turn to Who Was Mark Twain, by April Jones Prince (Grosset and Dunlap, 2004).

Thanks, Margo, for the lovely review -- I'm so glad you liked the book :)