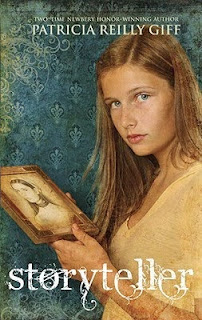 
Patricia Reilly Giff is a versatile novelist, equally popular with younger readers for her contemporary Zig Zag Kids and Kids of the Polk Street School series, as she is with middle grade students, whom she has targeted with both historical fiction and contemporary novels such as the Newbery Honor winners Lily's Crossing and Pictures of Hollis Woods.


Her newest release, Storyteller, tells the stories of two girls, Elizabeth and Zee, distantly related to each other across more than 200 years.  When Elizabeth's father leaves for Australia, she is sent to live with her Aunt Libby, her mother's sister, whom she barely knows.  At her house she discovers an intriguing old framed portrait of a distant relative named Eliza, known as Zee, who looks almost exactly like her.  She is immediately drawn to the picture, thinking how strange it is to look so much like someone who lived so long ago.

As Elizabeth's aunt shares with her the bits and pieces she knows of Zee's story, Giff skillfully interweaves Zee's 18th century diary, which begins just as hostilities are breaking out between the colonists and the British.  The absent-minded Zee longs to make her father and mother proud of her, but doesn't seem to be able to do anything right.  As political tensions split apart her small community, pitting neighbor against neighbor, Zee's brother and father take off to train with a militia led by General Herkimer, who comes from the same part of Europe as they do, leaving Zee and her mother alone to mind the family farm in upstate New York.

But when Zee's house is set on fire, she loses everything--including her mother.  With the help of Old Gerard, a Native American, she takes off on a journey that will require all Zee's survival skills as well as strength she didn't even know she had.  She will need every ounce of courage to overcome her shock at her loss and fend for herself, traveling through the wilderness to try to find her brother and father at the far-away fort.

As Elizabeth, in the 21st century, learns more about Zee and has the opportunity to walk where her distant relation walked, she becomes the storyteller, the heir to Zee's story, the story she'll pass on to her own children.

This is an excellent novel to pair with Gary Paulsen's 2010 release Woods Runner; both stories deal with aspects of the American Revolution that are less discussed in literature for young people, since they take place on the "frontier" or wilderness rather than in the urban political hubs of Boston, Philadelphia, or New York.  They therefore provide a much different perspective on the conflict; both also highlight the role that the Native Americans played in the Revolution, many fighting on the side of the British in the hopes that they would stop further colonial expansion into their lands.
Posted by Fourth Musketeer at 5:00 AM