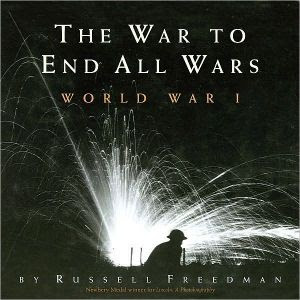 Award-winning author Russell Freedman is one of the best writers out there for non-fiction for young people, and I was eagerly looking forward to reading his newest book, a history of World War I.  I'll admit it--I actually prefer good juvenile non-fiction to adult non-fiction; I love to read about history, but I don't have the patience to read through a 1,000 page biography or history book these days.  I'd rather let Mr. Freedman read those books, and then distill the essence in his powerful but crystal clear writing style in 192 pages.

We all know what World War II was about--even school kids still hear about Hitler, Hiroshima, and Anne Frank--but World War I doesn't have the huge place in popular culture these days that World War II occupies.  Yes, we might remember that the war started with the assassination of an Austrian archduke, but what was it all really about?

In the opening chapter, Freedman lays out the critical events of June 28, 1914--the date the Archduke Franz Ferdinand, heir to the imperial throne of Austria-Hungary, and his wife, Sophie, were assassinated by a member of a Serbian terrorist group.  Austria wanted to punish Serbia for this crime, and declared war on its neighbor.  But in a series of events that "appeared to defy logic and common sense," before long, all of Europe is caught up in a war that, as Freedman explains succinctly, "few had expected and almost no one wanted...historians continue to debate the tangled and confusing causes of the conflict, the series of accidents, blunders, and misunderstandings that swept the nations of Europe toward war...whether war might have been avoided."

Troops were quickly mobilized, and six million troops were soon on the move in Europe.  Each country initially believed that troops would be home by Christmas, and Freedman documents the outbreak of national patriotism that erupted in all the combattant nations.  Young men of all European countries ran to volunteer, and we see poignant photographs of fresh-faced young soldiers smiling as they leave for war.  But the battles that ensued in August of 1914 brought a new kind of horror to warfare, leading to more than 100,000 deaths and several hundred thousand injured in just that brief period.  But no one could have forseen that the war would drag on for four long years, fought in trenches on a Western front that would change little over the rest of the war and spreading to other countries throughout the world.

Besides talking about the war chronologically, Freedman discusses different themes, including the changing technology of warfare, life in the trenches, in-depth discussions of particularly important battles, a discussion of the war at sea, America's role in the war, and the aftermath of the conflict.

Freedman enriches his narrative with plenty of moving first-hand descriptions from soldiers who fought in the war; these eye-witnesses hoped that by describing the horrors of war in all their terrible details they would help it from happening again. The abundant archival photographs and maps are critical to the emotional impact of this book (this title is available on audiobook, but without the photographs the listener would miss so much of the impact of this volume that I can't imagine choosing to experience this particular book that way).  We see soldiers, both dead and alive, photographed in their trenches, wearing gas masks, washing their feet to help prevent infection, and burying their comrades, as well as photos of world leaders, civilians, and scenes of the devestated landscape.

Freedman emphasizes at the end of the book that it is impossible for us to really understand the massive human cost of this war; 65 million men fought in the conflict, with more than half becoming casualties (either killed, wounded, missing, or taken prisoner), not to mention the 10 million civilians estimated to have died of war-related famine or disease.  What's more, entire towns were destroyed, farmland burned, and the European economy left in ruins.

Perhaps the most important understanding that I took away from this volume is that World War I and II cannot really be considered as separate events and should be considered as part of the same struggle. The draconian surrender terms and humiliation doled out to the Germans in the Treaty of Versailles that officially ended the conflict--including the "war guilt" clause, assigning Germany the entire blame for the four-year war-- led directly to the conditions in Germany which led to the rise of Hitler, the rearming of Germany, and the beginnings of World War II.  The bitter irony of Freedman's title, The War to End all Wars, will not be lost on any of his readers, since despite the fervent hopes of those who fought in The Great War, another enormous conflict erupted less than a generation later. Russell ends his narrative with an ominous full-bleed, two-page photograph of Nazi soldiers in tanks waiting for the order to invade Poland, just 20 years after the Treaty of Versailles.

This outstanding book is clearly a must-have for all school and public libraries, and is likely to figure prominently during "award season." While this book could be used for school reports, it makes a riveting read for anyone interested in history.  An interesting footnote:  this book is dedicated to Freedman's father, who fought in France in WWI as a teenager.

A book trailer (actually an interview with Freedman) is available here.
Posted by Fourth Musketeer at 5:00 AM

Margo...what a fabulous review! I am so eager to read this book!
Sandy

Thanks for this review, Margo. I have always had an interest in WWI as well as WWII and will have to read this book now.

This is so timely for me as I am writing about the connections between wars. So far, I've focused mainly on how WWII led to the wars we've experienced since then but I knew that WWI and WWII are also linked. How awesome that Freedman has written this resource.

Sounds like Freedman has done it again. His books are amazing. Another WWI title (nonfiction) I really enjoyed reading was War Horse.

Oops, I meant to say fiction!