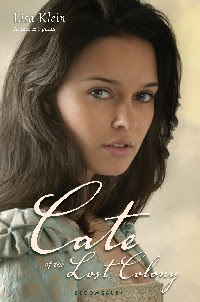 Lisa Klein's absorbing fourth novel plunges the reader head-first into the mystery of the lost Roanoke Colony of Virginia.  As Klein writes in an afterword, the fate of the 117 men, women, and children who landed on Roanoke Island in 1587 is "perhaps the greatest unsolved mystery in American history."

This new novel represents historical fiction at its best; Klein creates an appealing fictional character, young Cate Archer, and inserts her into the actual events of the time in a historically believable way, and in so doing illuminates a fascinating but little-studied mystery of American history.

Our heroine, young Cate, seems to be blessed in her position as a favorite attendant to Queen Elizabeth; but the Queen's favor is fickle, and when she discovers that her current favorite, Sir Walter Raleigh, and Cate share a mutual romantic attraction, she arrests Cate in a fit of jealousy and then exiles her to Raleigh's new colony in the New World.  Unbeknownst to the Queen, Cate craves adventure, and dreams of escaping to a new life.  She is fascinated by tales of the New World and the Native Americans who are brought across the ocean to the court as curiosities.  These include the handsome young Manteo, a Croatoan Indian who quickly learns English, and narrates parts of the story, alternating with Cate herself and Sir Walter Raleigh.

Klein uses the actual passengers who sailed to Roanoke to populate the rest of her novel, including little Virginia Dare, considered to be the first English baby to be born on American soil.  The colonists arrive too late in the summer to successfully plant crops to sustain them through the winter, and Governor White sails back to England to beg for supplies.  But life does not go well on Roanoke; the colonists clash with the local Indians, and fight among themselves as well.  Cate, in her courageous efforts to make the colony succeed, begins to learn the local language and befriend the native women.  Help from England does not arrive...will the colonists survive?  Will Sir Walter himself come to save Cate, or should she allow herself to experience a new love in the New World, with Manteo and his tribe?

Since no one knows what really happened to the Roanoke colonists, Klein is free to imagine her own version of events, one which I found perfectly believable and fitting (and which I will not discuss since I don't want to spoil the suspense for any readers!)  The author's afterword gives details on her research and her treatment of some of the historical figures in the story, particularly Sir Walter Raleigh.

One element of the novel I particularly enjoyed was the contrast between the wealth and intrigues of life at Queen Elizabeth's court and the hardships of life at the new colony.  Klein handles depiction of the native culture in a sensitive way, although she emphasizes that nothing is known about the particulars of Manteo's people.  Instead, Klein incorporates Algonkian legends and history to imagine Manteo's personality and mindset.  Also, there is a great romantic triangle at work here between Cate, Sir Walter, and Manteo that should have great teen appeal (sorry, better than Bella, Edward, and Jacob!)

A slideshow of images related to the book that inspired the author can be found on the author's website here.

For students who are interested in exploring Roanoke further, there are numerous non-fiction books about Roanoke for young people.  These include:

The Lost Colony of Roanoke, by Jean Fritz (Putnam, 2004)
Mystery of the Lost Colony, by Lee Miller (Scholastic, 2007)
Roanoke The Lost Colony:  An Unsolved Mystery from History, by Heidi Stemple and Jane Yolen (Simon & Schuster, 2003)

Those interested in fiction about Roanoke might like to read the just-published Sabotaged, the newest volume in Margaret Peterson Haddix' series The Missing (Book 3) (Simon & Schuster, 2010).  In this novel, aimed at a slightly younger audience (10-14 year olds), two contemporary time-travelers find themselves with a missing child from history, who turns out to be Virginia Dare of the Roanoke Colony.  Haddix provides an excellent afterword with additional historical information on Roanoke.

Another option for this age group is The Lyon Saga, a trilogy about Roanoke by M. L. Stainer; the first volume is The Lyon's Roar (Circleville Press, 1997).

Teens may also be interested in a very well-reviewed new non-fiction book for adults about the colony, A Kingdom Strange:  The Brief and Tragic History of the Lost Colony of Roanoke by James Horn (Basic Books, 2010).

Lucky you to get a review copy of this book, I can't wait to read it! I love Tudor Court and New World books but I haven't read any Ronoake books yet, this one sounds so interesting.
Thanks for the great review Margot!

saw your e-mail on yalsa-bk--I have this in my huge TBR stack, but seeing a historical fiction fan write such a positive review, perhaps I should move it closer to the top of the pile.

P.S. Might you consider reconfiguring your commenting structure? Many places I visit allow for Name/URL as a choice

Thanks for your suggestion--I think I have fixed it so you can do that (at least it seems to work that way on my computer).

Enjoyed your review, and I really appreciate that you mention other books as well, especially the one for the 10-14 age group, which is who I review for.

I really enjoyed your review of this book. I'm going to check it out. Time to get back in to the history swing of things now that the semester is starting.
Also, I've given you the One Lovely Blogger Award.

Thanks for the review! We posted a link to your blog on the official Bloomsbury Teens Facebook page: http://www.facebook.com/BloomsburyTeens