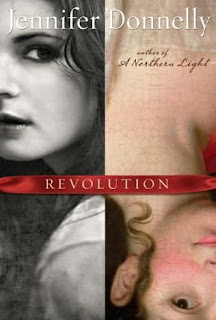 
Jennifer Donnelly's newest novel weaves a spell on its readers with its riveting genre-busting blend of realistic contemporary young adult fiction, historical fiction, and even some paranormal fiction tossed in the mix.  It's the story of two fascinating young women, Andi and Alex, who live more than two centuries apart, but whose lives intersect at the close of this compelling tale.


We start out meeting Andi, a brilliant but very troubled high school senior who attends a ritzy prep school in Brooklyn; an incredibly gifted guitarist who lives for music, she is in a deep depression, tottering on the edge of suicide despite psychiatrists and pills, since the death of her younger brother, Truman, a death she feels responsible for.  Her parents' marriage has fallen apart; her father's a Nobel-prize winning geneticist responsible for unraveling the mysteries of the human genome, while her mother is a talented French artist who paints non-stop to cope with her young son's death.  When her father says she's going with him to Paris over Christmas break, she's not happy about it, but goes along to start researching her senior thesis about an 18th century French composer and guitarist.  Her father is called to Paris to analyze the DNA of an old heart believed to belong to Louis Charles, Dauphin of France and son of Louis XVI and Marie Antoinette, who was believed to have died in the Tower during the French Revolution.  Some believed the young boy might have escaped, and Andi's father and his historian friends intend to put the mystery to rest with 21st century technology.

This all seems to have little to do with Andi and her problems, until, hidden in an old guitar case, Andi finds a portrait--one that looks much like her brother, but was clearly painted long ago.  In the case is also an old diary, dated April 1795.  This is the diary of Alex, who talks about a prisoner in a tower...sure enough, the portrait is of Louis-Charles, the Dauphin.  Reading the diary, Andi discovers the life of Alex, a young actress who dreams of a career on the stage, but through a twist of fate, becomes a companion to Louis-Charles at Versailles and later in Paris.  Through her diary, we experience the progression of the French Revolution, the hope and then the despair as Robespierre and the Jacobins launch the Terror.  Alex's love for the Dauphin, taken forcibly from his mother to be educated as a "good Revolutionary," causes her to endanger her own life to try to free Louis Charles, and finally, to provide the abandoned prince with some hope and light.

Andi's contemporary voice is interrupted with excerpts from Alex's diary, which we read along with Andi as she becomes more and more drawn in to the diary.  Donnelly skillfully creates distinct voices for both characters which suit their personalities and time periods.

All teen novels seem to need at least a bit of romance, and in this novel we have a relationship between Andi and a handsome young French guitarist and rapper whom she meets while performing on the street.  This character, who is of North African background, adds another element to this rich story, as Donnelly touches on the racism and poverty of these immigrants who live largely in housing projects in the Paris suburbs.  But when Virgil takes Andi to a party in the depths of the Paris catacombs, she meets a "hot goth" guitarist, who leads her into a part of the catacombs where tourists can't go.  When they exit the catacombs, things get really strange--"the men all have ponytails.  All of them."

It turns out Andi has wound up in the Paris of the Revolution, with the very musician whom she is researching for her thesis.  But is she Andi, or Alex?  And will she be able to get back to her 21st century life?

This is such a fascinating novel on so many levels, and its blend of different genres should make it an easy sell to students who might not usually pick up a historical novel.  Not only are both girls great characters, Donnelly melds the stories together in a highly creative way.  When I first started the novel, I wasn't sure if the two-story approach was going to work, but I was entirely convinced by the end.

For those who enjoy this book, a great novel to pair with Revolution would be The Bad Queen:  Rules and Instructions for Marie Antoinette, by Carolyn Meyer (Harcourt, 2010).  For teens willing to tackle a longer book, Abundance:  A Novel of Marie Antoinette by Sena Jeter Naslund (William Morrow, 2006), is an engrossing fictional "diary" of the queen.

Although the French Revolution is one of the most written about subjects in history, there don't seem to be a plethora of excellent non-fiction books about the subject written for young people here in the U.S.  Some of the more promising titles include:

However, there are several excellent documentaries that are available from libraries or Netflix:  I would particularly recommend The French Revolution, a History Channel Documentary from 2005, which provides a good overview of the revolutionary period, or for more on the doomed royal family, Marie Antoinette:  A Film by David Gruber (2006), available from PBS Video.  Teens might also enjoy the 2006 Sofia Coppola film Marie Antoinette (which includes only the early days of the revolution, ending when the royal family leaves Versailles).

This book sounds really interesting and I hope that it encourages more teenagers to read YA historical fiction. Thanks for the review!

Thank you for drawing attention to this new novel. It sounds fascinating! Your readers might also be interested in the novel MADAME ROYALE by E.M. Vidal, which is about Marie-Antoinette's daughter's search for the lost Dauphin. Thank you for your great review and lovely blog!

Thanks for your comment on my post about this book yesterday - you've written an excellent review and it makes me even more eager to read this book! I've always been interested in anything to do with Marie-Antoinette and the French Revolution, so I think I'm going to love that aspect of the book along with the present day story.

I keep hearing about this book! It was reviewed in the New York Times this week. My plan to read it immediately has been thwarted by all of the copies in the local library system being checked out at once! Your review adds to both the syncronicity of this book being everywhere and my desire to read it.

You might want to put this one on your holiday list--it's worth owning!

One of my favorite books as a YA was The Scarlet Pimpernel. The romance, the danger, and the happy ending. The story of the Louis XVI, Marie Antoinette and the dauphin is so tragic. Donnelly has managed to present an fascinating twist on those times.