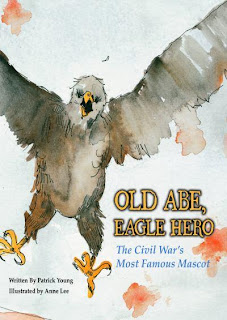 
Civil War regiments sometimes marched into battle with animal mascots; the most famous of these was a bald eagle dubbed "Old Abe" by the soldiers of the 8th Wisconsin Infantry.  This "biography" of Old Abe starts with his early days, when he was hand raised by an Indian village and then traded to a farmer named Dan McCann.  The eagle became a family pet, and when McCann's neighbors marched off to fight in the Civil War, McCann, who couldn't fight himself because of a bad leg, sent the eagle off to war instead.  The soldiers constructed a special perch trimmed with American flags for the bird to sit on, and off he went.

Old Abe turned out to be very courageous in battle, and was an inspiration to his regiment, so much so that Southern soldiers tried to capture him.  As he made his escape, Old Abe was injured, but survived the battle, flying away behind the Northern lines.  The press loved the story, and soon Old Abe and his adventures were famous all over the country.

Old Abe had a distinguished military career, participating in twenty-five major battles before being sent home to safety, where he was given a place of honor at the Wisconsin Capitol building.  P.T. Barnum even tried to buy him, but Old Abe stayed put, visiting with the soldiers from his regiment who came to see him as well as the general public, as well as making an appearance at the Chicago World's fair.

The author, Patrick Young, is a descendent of the commander of Old Abe's regiment, and grew up hearing family stories about the eagle from his grandmother and mother.  His book was originally published with different illustrations in 1965, but the text is not at all dated and offers a lively narrative, well-suited for reading aloud.

Artist Anne Lee makes her picture book debut with this title, and her atmospheric watercolor and ink paintings of Old Abe and his friends add a fresh touch to this story; I particularly like her images of the eagle soaring in the vast sky as he hovers over the battlefield, with an American flag below, on his way to safe haven after being injured.  She uses a palette with many shades of yellow, browns, and oranges, which evoke the sepia-toned photographs of the Civil War era, highlighted by the blues and grays of the soldiers' uniforms.

This book would make an excellent read-aloud for elementary school teachers for units on the Civil War or for discussing our national bird, the bald eagle.  It's also a heartwarming animal story that many  parents would enjoy sharing with their children.

A website devoted to the book can be found here.
Posted by Fourth Musketeer at 5:00 AM

This sounds like the sort of story I LOVE. So glad you told me about it.

I just read this book and, while I enjoyed the story and thought the illustrations were wonderful, I'm so disappointed in the lack of sources or an author's note. :( I think it would have added so much!

Yes, I think you're right--there is some of that information on the author's website but it would have been easy enough to include it in the book as well.

my gg grandfather was the danial mccann who traded the bushal of corn for two of baby eagles.im very proud of my family heritage.and that the eagle was named after president abe lincoln whos wife side im also a decentent of.