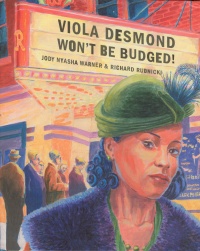 
My second Girl Power release for the week is the new Canadian picture book about Civil Rights pioneer Viola Desmond.  Like her better-known counterpart Rosa Parks, Viola refused to give up her seat--but in this case in a segregated movie theatre in 1946 Nova Scotia, rather than a city bus in 1955 Montgomery.

The story is told in a folksy, oral-history tradition, with the narrator speaking directly to the audience, drawing us into this compelling story of racism and courage.  Viola, owner of a beauty salon, is forced to stop in New Glasgow, Nova Scotia when her car breaks down.  To pass the time, she decides to stop at the local movie theatre.  She finds the perfect seat, down in front, and before she can settle in to enjoy the movie, an usher tells her she has to go to the balcony.  When she refuses,  "They took Viola to jail.  Can you believe it?"  After being fined $20 (a lot of money back then) for "refusing to pay the proper ticket price," she was released.  The judge wouldn't listen when she said she was happy to pay for a downstairs ticket.

Viola and black community groups decided not to put up with this segregationist treatment, and appealed her case.  Although the appeal was unsuccessful, the author points out that Viola's fight galvanized the fight against segregation in Canada, which was outlawed in the late 1950's.

Viola Desmond Won't Be Budged! is the first book of Jody Nyasha Warner, a writer, editor, and former librarian who is particularly interested in African Canadian history.  The strikingly colorful acrylic illustrations by Canadian illustrator Richard Rudnicki add significantly to the story; on the publisher's webpage, you can click inside to see a number of two-page spreads from the book.  I particularly liked the artist's use of hot colors such as orange, red, and yellow, which lend an almost expressionistic color palette, enhancing the emotion of the story.

This book would be a terrific addition to school library collections, and would be an excellent choice to read during African-American history month, giving students some insights into similar struggles that went on among our neighbors to the North.
Posted by Fourth Musketeer at 5:00 AM

Sounds like a great person and book. I was glad to learn about it. We had Ruby Bridges come to visit our school a few years ago and she is living history. She was one of the first kids to attend a de-segregrated school in the deep south. There is a famous Norman Rockwell depicting her with the security team around her. Thanks for your post. Will be reading about Viola soon!