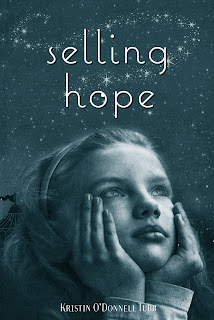 
It's May 1910, and people around the world are working themselves into a near frenzy over the coming of Halley's Comet.  Astronomers predict that the Earth will actually pass through the tail of the comet, and despite assurances from scientists that no harm would come to people on Earth, many are panicked, thinking the end of the world is at hand.

Author Kristin O'Donnell Tubb, (check back tomorrow for an interview with Kristin!)   taking inspiration from the centenary of this Halley's Comet hysteria, has written a delightful historical novel for middle grade readers.  The story centers on 13-year old Hope, who tours with her magician father in a "small-small-time" vaudeville troupe.  Hope alternates between serving as a magician's assistant for her father and playing the role of a child medium with Cross-Eyed Jane, her roommate and mother-figure on the vaudeville circuit (Hope's own mother having died some years before the story begins).

The book's narrative begins on May 1, 1910, "Seventeen Days Till the End of the World." Hope's got more immediate worries than the impending comet however;  it's about time for the annual blue envelopes, in which the road manager, Mr. Whitting, hands out notices to those who are being fired from the show.  Hope secretly wishes that her father's act will be cut, so she can live in one city and one house, like other children.  But Hope is always practical, and she knows that if they're out of a job, they'll need money, and fast.

And the comet provides her with the perfect opportunity, when she is struck with inspiration, "almost as if the tail of the comet reached out and tapped me singly...Money. Medicine. Mints.  Yes, these people needed hope.  And I was just the one to sell it to them.  In pill form."  And who will help her with her scheme but the young Buster Keaton, appearing with his parents on the same vaudeville program as Hope and her father.  Soon she and Buster are raking in the money from Chicago residents of all ages, those who "need hope more than money."  And she's even invited by Buster to an elegant comet party at the swanky Palmer House Hotel.  It will take more than anti-comet pills, however, to make Hope feel safe and secure, as she struggles to figure out what home and family mean to her.

Tubb does a terrific job of capturing the atmosphere of the comet panic, making effective use of actual news headlines from the period to begin each chapter.  She also vividly portrays the "small-small-time" vaudeville circuit,  peppering Hope's first-person narrative with suitable vaudeville one-liners, giving a real sense of life on the vaudeville circuit.  We also learn lots of vaudeville jargon, like "coin," for customer, experience life in a cheap boarding house with its awful food and dirty rooms, and meet real-life vaudevillians in the novel, including not only Buster Keaton but other actual performers as well.

The author provides a brief list of recommended reading on various topics touched on in the novel, as well as an Author's Note that provides some additional background on the Halley's Comet appearance in 1910 and vaudeville.

For more on Buster Keaton, you might want to visit the website for the International Buster Keaton Society (they even have an annual convention).  Keaton's films are widely available on DVD.  There's also a recent picture book on Keaton's early years:  Keep Your Eye on the Kid:  The Early Years of Buster Keaton, by Catherine Brighton (Roaring Brook Press, 2008).

Interested in a DVD about vaudeville?  You might be able to hunt down from your local library the 1997 documentary Vaudeville, narrated by Ben Vereen, which features both archival footage and oral history about the period (not available from Netflix at this time).

For more on Halley's comet in 1910, see the following commentary from the Denver Post, "Halley's Comet 100 Years Ago."

Oh, I loved this one!

Sounds great! I haven't read much about Vaudeville. And 1910 is an interesting time period. Post-Victorian but pre-WWI/roaring 20s.

Thanks so much, Margo, for the nice words about Selling Hope! I'm delighted you enjoyed it! And thanks, Abby - nice to run into you here! :-) Alison, 1910 *was* an amazing time period! When I pitched the story to editors, I described the era as one of "holdover Victorian sensibilities clashing with Industrial Age objectivity." Growing pains aplenty! :-)

This one sounds great-I'll have to check it out!

This sounds like a treat! I never knew that there was a big scare about Halley's Comet.

One of the next books on my "To Buy" list.