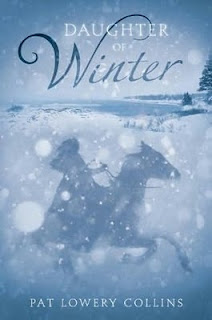 
Recommended for ages 12 and up.

Pat Lowery Collins' new release tells the story of 12-year old Addie, a resilient young girl in Massachusetts in 1849.  When the novel opens, things couldn't be much worse for our heroine--her father took off to make his fortune in the California Gold Rush, leaving Addie with Mama and her little brother Jack.  But now Mama and Jack have died of the flux, and Addie is trying to manage on her own with only her cat Matilda and the farm animals for company.  When the townspeople ask, she pretends that everything's OK and that she's still taking care of her sick family.  The only adult who seems to know what's really going on is a mysterious ancient Wampanoag Indian woman, Nokummus, who appears to be watching over Addie.

Addie's great fear of being discovered and sent away to live with strangers as a servant girl leads her to run away from her cozy home into the dead of the Massachusetts winter.  As foolish as this might seem, we learn that Addie has camped with her father in all seasons, and knows what to do to survive in the wilderness.  Along with Addie, we feel the biting cold as she struggles to build a fire and feed herself, finding shelter in an abandoned shipyard.  And always, she's waiting for Nokummus to come and rescue her.  Sure enough, the old Indian woman shows up, taking Addie to her home or wetu on a nearby island, where she cares for her and shares the stories of the Wampanoag people.  Addie's always felt a little different from the people in town, but she was never sure exactly why. Soon, under Nokummus' guidance, Addie discovers her real heritage--and truths about her family that she had never imagined.

This novel encompasses a number of themes; it is a coming-of-age novel, about a young girl attempting to figure out where she fits into the universe in which she lives, as well as an adventure/survival story.  In addition, it's a multicultural novel, in which the author includes many details of Wampanoag life in the 19th century, from their diet to their dwellings, legends, and rites.  These are the same Indians familiar to us from the story of the Pilgrims and the first Thanksgiving.  The only member of the tribe we meet is the elderly Nokummus.  Yet the author keeps Nokummus at arm's length from Addie, who desperately longs for an affectionate word or touch.

While this is a well-written novel, particularly deft in its evocative descriptions of the Massachusetts winter, I never really warmed up to the story, partly because I had difficulty believing in a 12-year old girl being so reluctant to ask for help from adults when tragedy strikes her family, and also because I found the character of Nokummus too remote for me to feel emotionally involved in her story.  Nonetheless, I can imagine this book appealing to some tween and teen readers, particularly those with an interest in Native American cultures, and would consider it a worthy purchase for school and public libraries.

For another blogger's review of this title, check out The Bibliographic Book Blog.
For more on the Wampanoag Tribe online, see their official website.
For a variety of helpful links on Native Americans in literature for young people, see Cynthia Leitich Smith's Cynsations Native North American resource list.

Thanks for another great book review...I always find great things on your site.

I was riveted by your book review. I want to read this book!!! Badly! Thanks for such a great post, as usual!!!

You really have a great blog!