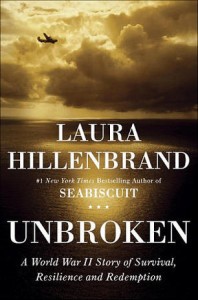 While I don't usually review titles published for adults on my blog, I was so taken with Laura Hillenbrand's amazing saga of World War II veteran Louis Zamperini--a terrific read for teens as well as adults--that I had to share it with my readers.  You may recognize Laura Hillenbrand's name from the best-seller she wrote a few years ago, Seabiscuit:  An American Legend, which inspired a very popular movie based on her book.

While doing research on Seabiscuit, Hillenbrand kept coming across newspaper articles on Louis Zamperini, and was so intrigued by his story that she hunted down the still-alive vet and became obssessed with telling his story.  Zamperini's story is so gripping and amazing that it's a clear case of "truth is more amazing than fiction."

Zamperini, born into a large Italian-American immigrant family, grew up in Torrance, California, where he was on the verge of becoming a juvenile delinquent until his older brother, Pete, recognized Zamperini's athletic abilities and began encouraging him to train as a runner. Pete was so good that he made the 1936 Berlin Olympic team, and was widely expected to be the first runner to break the four-minute mile mark.  The war interfered with his plans to continue training for the next Olympics (ironically scheduled for Tokyo) and soon he was serving as an airman, stationed in Hawaii.  On a mission to find a missing aircraft, his plane, too, went down over the Pacific in May, 1943, with only Louis and two others surviving the initial crash.  After a harrowing journey over 47 days and thousands of miles of ocean, emaciated, dehydrated, and dogged by hungry sharks, the survivors are finally picked up--by the Japanese.

While the reader breathes a brief sigh of relief, unimaginably worse horrors are yet to come for our hero, as he is sent to Japanese POW camps, where he is starved, beaten, emotionally abused, worked practically to death, and humiliated.  Barely surviving the war, Louis' torments are not over; returning stateside, he is haunted by unspeakable nightmares populated by his tormentors, and slides into alcoholism, despair, and obssession with revenge on "the Bird," the most odious and sadistic of his Japanese captors.  Louis' journey to redemption is guaranteed to be one of the most inspirational stories you will ever read, and, much like many stories I've read of Holocaust survivors, his story of surviving the almost-unbelievable conditions of the Japanese POW camps is an incredible testament to the power of the human spirit and Zamperini's towering will to survive.

Hillenbrand's vivid writing is a model of page-turning narrative non-fiction, as engrossing as any novel.  She illuminates an area of recent history that is fading away as the last of the World War II veterans pass away.  Zamperini himself is still alive at age 94 and back in the spotlight as Hillenbrand's book, released in the fall, stays on the bestseller lists and Zamperini has been widely interviewed in conjunction with the release of the book, even participating in a book tour.  Zamperini himself puts in better than I can in an interview with the local Torrance paper, The Daily Breeze:  "Laura Hillenbrand is something else--the way she writes - it's unbelievable. It grips you and pulls you into the story. I know when I was reading it I had to stop and look out the window to be sure I wasn't back in prison camp." Although Hillenbrand and Zamperini have never met in person, the author conducted more than 75 telephone interviews with Zamperini over a seven-year period and the two became close friends.

This is a real-life timeless survival, adventure, and war story not to be missed, and it's sure to appeal to teens, particularly boys.  Highly recommended for high school libraries in particular!

Note:  For more on Zamperini, including lots more photos, see this profile from the Wall Street Journal.
Posted by Fourth Musketeer at 5:00 AM

I can't tell you how much I want to read this book! There's no sign of it on my library catalogue yet though!

Sounds amazing. Great title too I may add. Can't wait to read it.

If I can find my reading "mojo" again, this is next on my to read list.

This is such a timely post; thank you Margo. My neighborhood mommy book club just picked this book for two months from now so I am sending them your post on this book. We are all very excited to read it and have only heard great things about it!

I listened to the audiobook of this title and I loved it! Such a wonderful, gripping story!