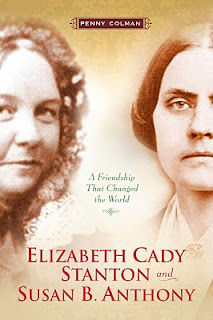 
Award-winning non-fiction author Penny Colman has written extensively for young people about the history of women in America, and her newest book focuses on "a friendship that changed the world"--Elizabeth Cady Stanton and Susan B. Anthony, two of the leaders of the 19th century American suffragist movement.  While there are many women who fought for the right to vote, Colman points out in her preface that these two women in particular are remembered for "their fierce, relentless, groundbreaking leadership and their powerful friendship in the fight for women's rights."  Their friendship lasted a remarkable 51 years, sustaining the whole movement, although sadly neither lived to see Congress pass the 19th amendment.

Colman paints a fascinating dual portrait in this book, which although published for young people, is equally suitable for adult readers looking for a well-written and reasonably comprehensive introduction to both women's lives.  In the beginning of the book, she alternates chapter by chapter, telling the story of both women's childhoods separately.  They grew up in quite different circumstances, Elizabeth in a large, wealthy family with servants,  her father a prominent lawyer and judge.  When her older brother died at twenty, eleven-year old Elizabeth decided to "be all my brother was," becoming an excellent student (the only girl in a class of all boys, relishing her studies of advanced mathematics and languages) and an accomplished rider.  She was shocked at the injustices women suffered under the law, and resolved to take her scissors and cut all the "odious laws...out of the books."  Her father gently explained to her that this would not make any difference in women's conditions, since there were many other lawyers and libraries.

Susan, on the other hand, was born into a large Quaker family, with a father who also believed strongly in education for girls as well as boys.   Her father managed a textile mill, and Susan was expected to help care for the younger children and pitch in with many household chores.  By fifteen, Susan became a teacher in her father's private school, and continued her own education later at a female seminary near Philadelphia.

We see their lives unfold side-by-side:  Susan, who had no shortage of suitors, remained an unmarried teacher, and Elizabeth, married to a prominent abolitionist and soon with a house full of children.  When Elizabeth moves to Seneca Falls, New York, she begins to plan together with her friends the first "Woman's Rights Convention."  They drafted a Declaration of Sentiments, based on the Declaration of Independence, with a resolution on the right of suffrage.  Elizabeth's own husband would not agree to it, and the convention was ridiculed in newspapers across the country.  But Elizabeth was not intimidated; more women's rights conventions followed, although Elizabeth was unable to attend due to pregnancies and her small children.  However, she would write speeches and letters that were read at these meetings by others.

Elizabeth and Susan were eventually introduced by fellow suffragist Amelia Bloomer and immediately hit it off, although at this time Susan did not share Elizabeth's intense commitment to women's rights, being passionately committed instead to the temperance movement. However, Susan's focus soon shifted to the issue of suffrage, as she began to realize that without the vote women couldn't push effectively for any other political changes.

The two women's skills complemented each other very well; Elizabeth didn't have the freedom to travel and make speeches as often as Susan because of her many children, so she often wrote the speeches that Susan then delivered all over the country.  Colman takes us chronologically through both of these icons of women's rights long lives, as each continued fighting to the bitter end to see the vote passed for women.

There are many excellent web resources on these two remarkable women.  Just to name a few to start with, for more on the web on Susan B. Anthony, see the website for her home in Rochester, New York, now a museum and Winningthevote.org, a project of the Rochester Regional Library Council.  For more on Elizabeth Cady Stanton, see Elizabethcadystanton.org and the website for Elizabeth Cady Stanton's house, now run by the National Park Service, which includes this attractive brochure/flyer from the Park Service on Elizabeth's life in Seneca Falls.

I highly recommend this book for purchase by school and public libraries; it could be used for both school reports and also for pleasure reading by young people interested in biographies of great figures from history.

For more on Penny's research and travels for this book, check out her Facebook page at the following link:  http://www.facebook.com/pages/Penny-Colman/121670284513664

I'm really looking forward to this one.

This is a friendship that intrigues us all - can't wait to read it & many thanks for this essay Margo.

The book is amazing! I was luck enough to get an advanced copy and thoroughly recommend it. I learned so much I didn't know about Susan and Liz.

Thank you for such a thorough and thoughtful essay/review.