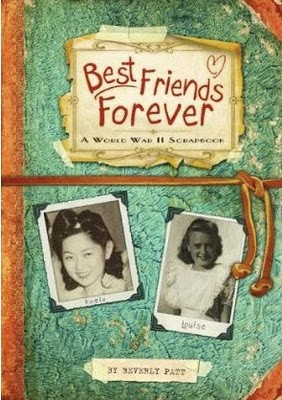 Tweens are likely to identify strongly with the sensitively-drawn characters in Beverly Patt's new scrapbook/novel that tells the story of a close friendship between 14-year old Louise and her best friend Dottie Masuoka during World War II. Louise starts the scrapbook when the Masuoka family and all other Japanese families are "relocated" to internment camps at the beginning of the war; it's her way of keeping a record of everything that happens to share with Dottie upon her return, from the goings-on at school to the growth of Dottie's puppy, Roxy, who she was forced to leave with Louise and her family because pets were not allowed at the internment camps. With yellowed pages and old newspaper clippings, photos, and miscellaneous period items such as hair ribbons and margarine box labels attached with yellowed tape, the book looks like it could indeed be a old scrapbook, which adds to the realism of the story.

Louise includes Dottie's illustrated letters to her describing life in the camp, from the boredom, the constant dust, to her worries about her grandfather's declining health. Dottie wonders poignantly in one of her letters to Louise, "Why was I born with this Japanese face? No one can see my American heart."

Louise has her own troubles at home; because of their German last name, neighbors throw rocks through their front window, together with a note "Go back to Germany, Nazis." She can't help wondering why, since America is at war with Germany and Italy too, they aren't locked up in camps like the Japanese? How can America be "the land of the free and the home of the brave," Louise wonders, when her friend Dottie and her family are forced to live behind barbed wire. Not to mention the small dramas of teenage life that Louise must cope with, including how to knit socks for soldiers without holes, squabbles with friends, growing a Victory Garden, her worries when her own brother joins the Navy, and even a flirtation with a wounded sailor.

When Dottie and her family are moved to another internment camp, Louise's letters go unanswered. Why doesn't Dottie answer? Louise begins a letter-writing campaign to the Office of War Relocation Authority in a desperate (and ultimately successful) attempt to find out the whereabouts of her friend's family.

The scrapbook covers just a year, and at the end, many questions are unresolved, including when Dottie will be able to come home. But Louise knows in her heart that their friendship will endure.

This was a very well-done and well-researched book that would be enjoyed by girls who read the American Girl series of historical fiction, and are ready to read something aimed at a bit older audience. The book also recalls the series of handwritten historical journals by fictional girls by Marissa Moss (i.e. Hannah's Journal). The only jarring note I found in the book was on the end-pages, where it looks as if Louise has written in by hand: "Louise + Dottie = BF4Ever." This type of abbreviation, which will be easily interpreted by contemporary young people who are used to texting, doesn't seem to fit into the World War II context of the book.

The book includes an excellent Author's Note which provides background on Japanese involvement in World War II and the internment camps set up by the U.S. government. Patt also provides a bibliography at the end of the book. Additional resources are available on the author's website, which includes a teacher's guide, an interview with the author about the book, and a recipe for sugar cookies referred to in the story.

Those interested in further exploring Japanese internment camps may want to read Cynthia Kadohata's novel Weedflower, as well as the classic Farewell to Manzanar.
Posted by Fourth Musketeer at 5:00 AM

My eight year old daughter read this one last week and proclaimed it was the best book she had read in at least 6 months! I noticed she laid it on my bed for me to read next.

Thanks for your lovely review! While researching this subject, I couldn't help but notice the similarities between prejudices in the forties to the 'racial profiling' that goes on today. I hope it will generate many interesting discussions in homes and classrooms alike.
And Tina, I'm thinking BFF must make your July reading list then, eh??!
A high five to your very discerning 8 year old;)
Cheers,
Bev Patt

What a great review! This sounds like a book I would have loved when I was younger. I'll have to check it out!